‘My Japanese Diet’ about Australian Craig Anderson’s weight loss journey in Japan is uplifting. By the end of this documentary which aired on SBS TV on 6th April, 2017, Craig loses 25kg and as a result, severely reduces the health risks he was facing because of his previous diet  of hamburgers and chips. He looks so much healthier and somewhat more content by the end of the story. 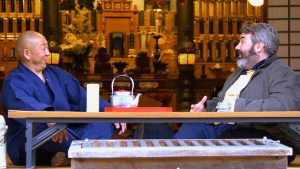 But as a documentary depicting Japan and its people and culture, this documentary was somewhat disappointing. What upset me most was the way Craig interacted with Japanese people.  Everyone he met seemed to be exceptionally gracious, inviting Craig into their kitchens and dining rooms, to family dinners, to a solemn tea ceremony,  to bathe and taste Shojin ryori at a Zen temple. Yes, I get that there was a language barrier, but was there any reason why the Japanese people had no ‘voice’?

Why were we not introduced to the  characters, why were we not allowed to get to know them better?  Who were the kids, their names, ages, what manga did they like; play soccer? Was the salaryman married? What was his job? Who was the woman making the tamagoyaki? Anything but the one dimensional depiction of voiceless Japanese just being ‘hospitable and nice’, as Japanese are often depicted in travel stories by western tourists.

I suspect that the cliched ‘weird gaijin’ act that Craig seemed to be engaged in was one of the reasons why we never had a chance to see the Japanese people as ‘real’ people. I found Craig very endearing, funny, and no problem feeling empathy for what he was trying to achieve. But I didn’t really believe he was such an uncultured white bloke out of his  depth and unable to control his chopsticks, which is how he was presented in this film.

And even if he were, that image of the Aussie tourist is so 1970s. I’ve lived here for 40 years and most Australians, especially city dwellers from Sydney like Craig, are no longer so culturally inept and are far more knowledgeable and in tune with Japan. So why present Craig as such an anachronistic caricature of a ‘gaijin’?

I guess I was hoping that not just his body, but Craig may have also undergone some transformation, become closer to the Japanese, at least to connect to the Japanese in a more meaningful way.

After all, if you’re going to declare that your diet is Japanese, then surely the historical, socio-cultural context in which a traditional cuisine exists is of some interest? I got no sense from watching this program that Craig had any desire to understand the larger picture. Perhaps those bits of film ended up on the cutting room floor.

The fact that this program was on SBS made it doubly disappointing. As a Japanese migrant living in Australia, I feel it’s my responsibility to keep a close eye on the way mainstream media depicts us, and this documentary was, alas, lacking in nuance.

Finally, for those wanting to adopt Japanese diet principles for health reasons, this program did not offer much relevant or useful information. The key cornerstones of Japanese cuisine (called the cuisine of water, because we cook in dashi rather than oil for example, is so fundamental, but the word dashi wasn’t mentioned once…), the reason why Japanese eat small portions and diversity of dishes, the importance of presentation, the importance of the five flavours and five colours…there’s so much more to Japanese cuisine than green tea and natto. This documentary missed all these points. Shame…

This website uses cookies to improve your experience while you navigate through the website. Out of these, the cookies that are categorized as necessary are stored on your browser as they are essential for the working of basic functionalities of the website. We also use third-party cookies that help us analyze and understand how you use this website. These cookies will be stored in your browser only with your consent. You also have the option to opt-out of these cookies. But opting out of some of these cookies may affect your browsing experience.
Necessary Always Enabled
Necessary cookies are absolutely essential for the website to function properly. This category only includes cookies that ensures basic functionalities and security features of the website. These cookies do not store any personal information.
Non-necessary
Any cookies that may not be particularly necessary for the website to function and is used specifically to collect user personal data via analytics, ads, other embedded contents are termed as non-necessary cookies. It is mandatory to procure user consent prior to running these cookies on your website.
SAVE & ACCEPT
Follow us on Social Media
twitterfacebookinstagram