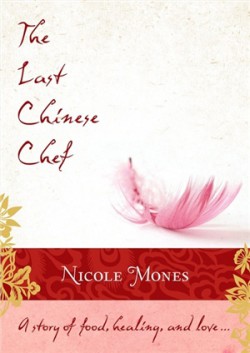 Food bloggers,  twitterers, facebookers, youtubers–the world is awash with food narrative. And if you like your food as narrative, Nicole Mones’ 2007 novel The Last Chinese Chef is right up your literary alley.

The American author is an occasional food writer and spent close to two decades running her own textile business in China, so her research is sound and she has an eye for Chinese exotica–like when the protagonist, Maggie, gets a quick lesson in the importance of Chinese food textures–“cui is dry and crispy, nen is when you take something fibrous like shark’s fin and make it smooth and yielding, and ruan is perfect softness–velveted chicken, a soft-boiled egg.”

The plot in summary: Maggie McElroy, a food columnist goes to Beijing to disentangle a possible patrimony claim against her recently deceased lawyer husband who frequented China on business. There she meets Chinese-American chef Sam Liang and ends up entangled with him and an Iron Chef like food competition that he competes in. So there’s love, betrayal, food, sex all served up with oodles of orientalism.

The book within a book format–The Last Chinese Chef is a culinary tome written by Sam’s grandfather which Sam is translating–doesn’t work too well though. In fact, one wishes that the whole book was the other book, because it’s narrative seems so much more compelling than the predictable love affair Maggie has with Sam, which of course helps her get over the dead husband. (An exotic “other” as new lover to get over betraying hubby is a literary cliche, surely?) But little tidbits are all we get of the book within this book, which might be a rather nice metaphor anyway for Chinese food, which often involves little tidbits of fabulously prepared food.

Here’s one juicy tidbit:”Yi Yin was the greatest of all Chinese chefs. Three and a half thousand years later, his writings are still read and discussed. He personifies the sanctity and power of cuisine through China’s history. He was born a slave. Yet he could cook so brilliantly that the Emperor appointed him Prime Minister. A man who could fine-tune the mysteries of the bronze tripods, the Emperor knew, could run the state and manage its alliances. This dynasty lasted six hundred and forty four years.” That short paragraph was more compelling to me than most of the book.

So if you forget most of the plot, and the blandness of the two main characters, the insights into Chinese culinary culture are worth savouring. I liked the boiled chicken with shallots and ginger. I tried it with a tender spatchcock, and it was divine, and yes, it is important how much water and how long to leave it post cooking. If you read the culinary references in the book carefully, you’ll realise how intensely complex Chinese food is, dense with narrative and how preparation upon preparation (like marinating, boiling, poaching, frying before actually cooking and serving) is the key to the intense deliciousness of Chinese food.

The best morsel I enjoyed was how literature is intrinsically tied up with cuisine–“eaters writing together. Poetry would be written in groups. People would get together and dine and play drinking games and write poetry–like a slam. So here, food and poetry developed side by side.” Perhaps the Chinese pioneered food with narrative?

The Last Chinese Chef by Nicole Mones, originally published in 2007