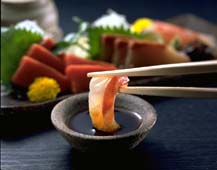 There are basically three types of Japanese soy sauce or shoyu 醤油:

1. Dark Soy Sauce or Koikuchi Soy Sauce is dark brown in colour with a mellow saltiness. It has a salt content of around 17-18 percent, and is used much like salt is used in the west or as dipping sauce for sashimi /sushi and also in cooking, such as in teriyaki sauce or stir fries.

3. Tamari is a rich dark soy sauce with a slightly viscous quality. Tamari is made with no wheat—just soy beans and salt and a little water, fermented for a much longer time. It is favoured by people with coeliac disease who cannot eat wheat. Tamari can be used like dark soy sauce but most Japanese use it for dipping sashimi rather than cooking. When used in cooking, it is often added just at the end to thicken and enhance the flavour.

Soy sauce can be kept out of the fridge, but it can oxidize, so it stores better in the fridge if not used quickly. Glass containers are better than plastic.

Don’t be too confused if you find other kinds of soy sauce. If you can’t find a good shop assistant to help you, just remember the basic 3 types above.

Just to confuse you a little, here are some other types of soy sauce you might encounter:

Shiro or White Soy Sauce which is very light in colour. It is made by fermenting mostly wheat with little soy bean and has a slightly sweeter taste. It is used for sashimi.

“Murasaki” or Purple is the term used for soy sauce in sushi bars. It’s a mixture of soy sauce and other ingredients like dashi or mirin, usually each sushi bar has their own secret recipe.

In Australia, the best Japanese soy sauce brands are Yamasa Soy Sauce or Shoda Soy Sauce. Most brands put out an organic product and low salt product these days.