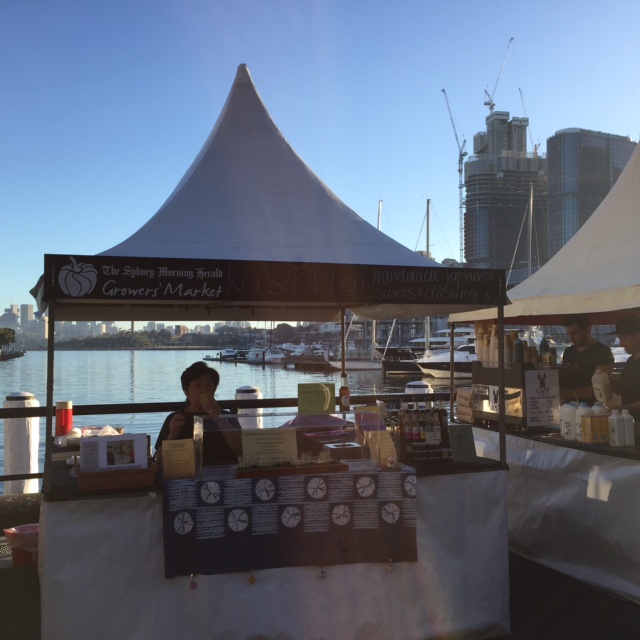 On April 3rd, 2016, the very last Good Living Growers Market at Pyrmont was held, 18 years after the very first one.

Kei flogs the dressings, at our last market stall

Kei and I first opened our Kei’s Kitchen stall selling hand made Japanese sauces and dressings  in 2002, so that’s 14 years of 4 am awakenings once a month. In fact, in the past 14 years, we’ve also had stalls at the North Sydney Growers Market, the Entertainment Quarter as well as the Frenchs Forest Organic Market. I reckon we deserve a hearty pat on the back for all that stall holding.

The greatest part of being part of the  markets was meeting people–people who enjoyed our food, other stall holders, our friends who came to visit us, customers who became our

friends. We’ll miss them all, not least our four legged friends.

We’ve also seen an evolution of the market scene in that time. On the face of it, there seems to be a burgeoning of so called farmers’ markets. According to an estimate by the Rural Industries Research and Development Corporation, there are about 300 produce markets operating in Australia now, a doubling from about 152 in 2011. If you include markets that also mix and match craft or bric a brac stalls, then I’m sure that number is even higher. This is a trend that mirrors other western nations like the U.S. where around 8000 farmers markets now exist, up from 1700 in 1994.

Yet in Australia, only 4 percent of consumers shop at the markets, and the bulk (70 percent) of food expenditure in Australia is sucked up by the main grocery chains–you know, the Voldemorts of retail.

That’s disturbing because we know that farmers’ markets (despite their many problems, we’ll get to that in another post) have huge far reaching benefits. Firstly, there’s the undeniable freshness. Darling Mills cos lettuce lasts nearly two weeks crisp and green, and Adelong Fresh farm eggs are so new, the yolks wear a halo. The straight-from-the-farm-and-into-your-mouth benefits can’t be overstated.

More importantly, there’s the warm fuzzy feeling associated with knowing that your money is going directly to the grower, many travelling overnight to deliver just-picked produce you can arrange daintily in colourful Oxfam baskets.

Our favourite heroes on that front include the legendary Les Langlands from Young whose persimmons (and other stone fruits) could make Kei’s face squishy with delight. “Alan the banana man” as he calls himself drove all the way from Coffs Harbour area to deliver his bounty of big bananas and avocados, but both retired from the markets some years ago, alas.

As for packaged or hand made products, we love how Dhiren Pillay’s Taj Mahal samosas are sometimes a bit spicier than at other times, because we know they are hand made, made by people, not stainless steel coloured factories. The idea that there are actual people behind the products who are passionate about what they sell is the best part of handing over my hard earned cash.

And perhaps the most unique thing about farmers markets is the narrative that comes with the produce. You get a chance to talk to the producers about how the drought is affecting the cherries, or how every 6 years, mandarins grow unbelievably juicy and sweet (that was in 2014) or how sesame from South America is bitter compared to India, hence the crappy sesame sauce (that was in 2015).

The grocery chain duopoly stranglehold in Australia has been the subject of much consternation and ACCC investigation in the past. While markets aren’t necessarily cheap, may not always have what you want and aren’t all that accessible as they’re not open all hours like the big chains, they still offer an alternative to the Voldemorts. Surely that’s a significant consideration as a conscientious consumer..

We’re sorry we’ve retired from the markets because we are committed to them, but it’s hard work and Kei deserves to retire…she’s 80! You can still buy our products at our Online Deli.