Sokyo at The Star in Sydney

(this is an old review and Sokyo has since moved onto greater things, and Chase Kojima remains one of Kei’s favourite chefs in Sydney)

Sokyo restaurant at the swank The Darling hotel, part of The Star casino complex in Sydney is in short, uber-sexy. Not tits and bums sexy, but “aesthetically sexy”, thanks to head chef Chase Kojima’s innovative adventures with food.

His seemingly endless creativity concocts dishes that are, at first glance Nobu-esque (with accents like dried miso, jalapeno chilli and yuzu kosho/chilli appearing in various incarnations). But his creations are not just fashionably jap-fusion–little surprises like the bright red and sweet yamamomo garnish (see picture above), or the Kyoto mini plums that came with our ocean trout, or the melt in your mouth Ooma tuna (the Beluga of tuna) shows his appreciation and ability to source quality Japanese ingredients. And his innovativeness has depth–the Moreton Bay Bugs with slippery sweet passionfruit jelly, burnt butter mayo and vegemite croutons is a lovely fusion of textures, flavours and colours, and the vegemite adds the final umami crowning layer, in the same way that a touch of soy sauce does to sashimi (this item no longer available).

Presentation is simple yet elegant, making Sokyo food at once playful, a little daring and attractive…oozing sexy aesthetics if you ask me.

What’s also great about Sokyo is the addition in 2014 of master sushi chef Takashi Sano, formerly of Tetsuya and Koi who is by far the best sushi chef in Sydney. Kei has been a huge fan of his for years. 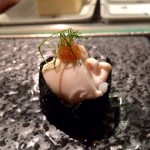 We always eat omakase, or chef’s selection, which is the only way to enjoy Sokyo and to experience the full force of Chase’s creativity and Takashi’s refinement.

What’s disappointing is the noise that masquerades as bgmusic–I know it’s supposed to be hip, but the sophisticated food deserves better sound design. It just makes you want to eat and run, rather than sit and savour. The service is a let down too, but you can get around that by making sure you sit at the bar in front of either Chase or Takashi for the omakase experience. If the atmosphere and service were as good as Chase and Takashi, Sokyo would probably enjoy more than its current One Hat status according to the Sydney Morning Herald’s Good Food Guide.

Chase is only in his early 30s, and his Nobu (Bahamas and Dubai) credentials are well known. But I think he’s trying to step out of the Nobu mould, and it’s great to see a Japanese chef (albeit Californian) experimenting to entice Sydneysiders to try different Japanesey ingredients, like cured saba (mackerel) sushi or to appreciate a new way of tasting beef by carefully cooking in a sous vide so it’s uniformly tender, and presenting it like a slice of sashimi. The Nobu influence is definitely there though–like Nobu, the variety of sauces is the feature of most dishes (many ponzu, tosazu, amazu and other vinegar/soy/citrus/dashi variations, often with heat).  His youthfulness is evident in his playfulness with ingredients, but he adheres to Japanese principles of cooking, including presentation. He doesn’t go overboard on the fusion thing, so his food maintains a fine balance of tradition and boldness.

P.S. Oh, and the desserts were divine, but that’s another chapter….
Now also open for breakfast.