Kaiseki cuisine is a traditional Japanese meal, usually consisting of around nine courses served in a prescribed order.

The modern day kaiseki is a rather sumptuous affair, but paradoxically, its origin is a minimalist, strictly vegetarian meal, almost humble in spirit. It was traditionally served in Zen temples to accompany the tea ceremony.

In the Japanese language, this original Zen kaiseki 懐石 is a combination of two words-“kai”懐 which refers to the bosom of the kimono, and “seki” 石 meaning stone. Much like the warmed stones Zen priests used to tuck into the bosoms of their kimonos to heat their empty stomachs to ward off hunger, the original kaiseki was a small meal, taken not to satisfy, but merely warm the stomach before strong green tea was ingested. It consisted of one soup, three small seasonal dishes and just three mouthfuls of rice. (一汁三菜）It was a meal of restraint-just seasonal ingredients, simply prepared.

While the original Zen kaiskei exists in its pure form to this day, and is still served as part of the tea ceremony, today’s kaiseki is quite a different affair. It is a much heartier and sophisticated meal centered on the drinking of sake (rice wine) rather than tea, and is very elaborate in presentation. 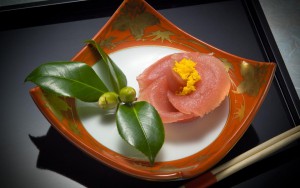 Though the two kaiseki are homonyms, today’s kaiseki 会席 is a totally different word in Japanese made up of two words-“kai” 会 meaning to meet, and “seki” 席 meaning seat. So quite literally, seat of meeting, (or in Aussie colloquial parlance, a party or a piss up!)

The contemporary kaiseki is a seven to nine course meal (or more) and any number of the following categories of dishes can be served, usually, though not always in this order:

Note that 7,8,9 are served after the sake drinking is over. 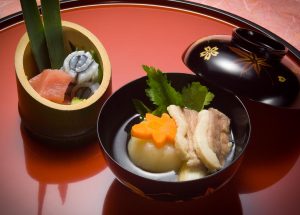 The beautiful book, Kaiseki by Yoshihiro Murata is reviewed here