Japanese cuisine is often referred to as the “cuisine of water”.

If you look at Japan’s geography, it’s not hard to see why. Surrounded by ocean, the slip of mountainous islands that make up Japan are lined with rivers, and from these abundant waters the Japanese caught fresh fish, the centrepiece of most Japanese meals.

Great importance is placed on the freshness of the fish. And when it comes to vegetables, seasonality is paramount. So freshness and seasonality are the two most important principal virtues of Japanese cuisine.

Simplicity is the third principal virtue of Japanese cooking. Seasonal vegetables are washed and cooked lightly in water, always simply to bring out their subtle flavour. Even dishes that require tedious preparation remain in essence, aesthetically simple.

Japan’s neighbours like China, and visitors like the Portuguese introduced new methods of food preparation like frying (e.g. tempura from the Portuguese; the principles of yin and yang which determines food presentation from the Chinese). While that gave Japanese cooking added depth, Japanese cuisine is still principally about water–dashi or bonito stock which is made from kombu (seaweed) and bonito flakes in water is the foundation stone of all Japanese dishes. Japanese food then, is essentially, fresh, seasonal flavours cooked simply in water. For this reason, it is wears the “healthy” tag well. 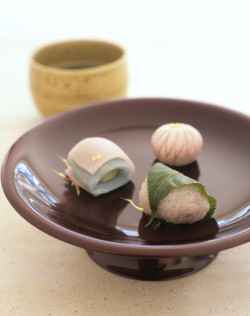