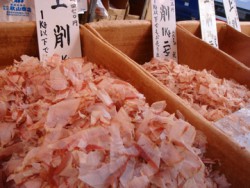 Umami literally means deliciousness or tastiness in Japanese. It’s fast becoming the “it” factor in food among in-the-know gourmands. And of course the food manufacturing industry is also on the umami bandwagon, developing ways to put umami into their processed foods. So expect to see jargonisms like “umami enhanced” on food packaging in the future.

In short, umami is the savoury mmmm taste in food, and was first isolated by a Japanese scientist called Dr. Kikunae Ikeda in 1908. It’s a taste sensation derived from the presence of amino acids called glutamates and Japanese dashi (made from kombu and bonito shavings) is particularly rich in these amino acids. Most stocks, like beef or veal stock, ripe tomatoes, parmesan cheese, mushrooms and even Vegemite are also naturally rich in umami.

Umami is now recognised as the fifth taste sensation after sweet, salt, bitter and sour. Umami receptors on the tongue have been identified. The history of the discovery of umami and summaries of recent research are available at Umami Information Centre, and it’s a pretty decent website, not so complicated to browse.

There’s a really simple way that the Japanese have been “umami enhancing” their foods for many years—Ajinomoto or monosodium glutamate,  the dreaded MSG. It was patented by Dr. Ikeda who discovered umami, and Ajinomoto has made a fortune out of it. Ajinomoto was a regular condiment on Japanese dining tables in the fifties and sixties.  MSG is still used in many Asian countries and by the processed food industry. (An aside: MSG is marketed as my name, Masako in Indonesia…)

In Australia in the early nineties, the CSIRO ran a research project on umami and how to incorporate it into foods for export to Japan. I don’t know what happened to the results, but now Nestle, PepsiCo, Campbell’s Soups and other food manufacturers are working on natural flavourings that are low in sodium and inject umami into their chips, soups, beverages. Senomyx is an American company dedicated to developing such flavours and many of their umami like flavourings appear in manufactured food.

There’s one thing about being umami aware—you can become a good cook quite easily. A dash of something umami rich like soy sauce, mushroom extract, balsamic vinegar, tomato paste or ketchup, Worcestershire sauce, parmesan cheese, can do wonders for a dish. In fact, soy sauce is a great “secret ingredient”—try a smidge in store-bought bolognaise sauce, it might make it edible.